A visit to the home of the Saudi royal family: Ad-Diriyah, Wadi Hanifa, and Riyadh

Pelly, (Lewis). A Visit to the Wahabee Capital, Central Arabia. In: The Journal of the Royal Geographical Society. Vol. 35.

Only edition of Pelly's account of his visit to Riyadh and the interior of the Nejd. Pelly's journey took him from Kuwait to Sadus, and from there to Al Uyaynah, the birthplace of Muhammad ibn Abd al-Wahhab, onward through Wadi Hanifa to Ad Diriyah ("picturesquely situated in a depression of the plateau leading down into the Wadi", with a discussion of the location's history as well as geography) and ultimately to Riyadh, where he met the ruler of the Nejd, Imam Faisal bin Turki bin Abdullah Al Saud (1785-1865). Pelly would return via El Hofuf, Bahrein and Bushire. His report is full of topographical detail on the interior of the Nejd, but also discusses subjects so diverse as the Bedouin traditions of breeding Arabian horses, the genealogy of the House of Sa'ud, and the local use of coffee (consumed in immoderate quantities) and tobacco (considered a mortal offence for a Wahhabi). 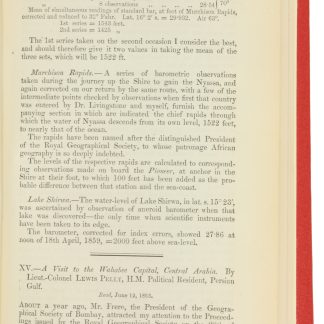