Fifth edition of General Daumas' work on all aspects of the Arabian horses of the Sahara desert. With commentary by the Algerian Sufi saint and military and religious leader Abd-el-Kader (1808-83), the Emir of Mascara who founded the Algerian state and led the Algerians in their struggle against French domination, and in 1847 was imprisoned with his family by the French government in the fortress of Lamalgue in Toulon.

Divided into two parts, the book includes extensive information on the principles of Arabian cavalry, military costumes of horsemen, celebrated Arabian horse breeds (Haymour, Bou-ghareb, Meizique), how to choose and acquire one's horse, nutrition, hygiene, the meaning of the variously coloured equestrian attires, rigging, veterinarian medicine and illnesses, crippled horses, castration, various kinds of military attacks in the desert and how to execute them, tribal wars, as well as ostrich, gazelle, and falcon hunting.

Daumas (1803-71), a French general of the first cavalry division, was posted to Algeria in 1835, which Charles X had invaded five years previously. Daumas participated in 18 Algerian campaigns, including those of Mascara and Tlemcen. Between 1837 and 1839, Daumas resided in Mascara as consul and personally got to know the Emir of Mascara. While in Algeria, Daumas learned the Arabic language and became one of the French army's leading experts on Arab culture in North Africa. Tribesmen came to respect him for his skills on horseback. In April 1850 he became director of Algerian affairs at the Ministry of War in Paris. 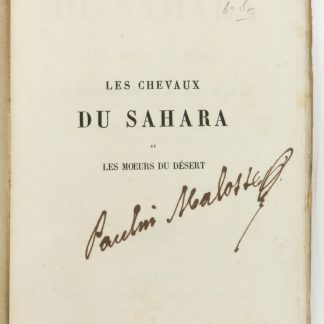