Disavowing "apocryphal" interviews with him in the German press

Addressed to the editor of a newspaper, Gorky's statement repudiates remarks that have been attributed to him in various newspapers: "From Maxim Gorki, who is staying in Berlin at present for a short time, we have received the following note: / Allow me, dear editor, the polite communication that the interviews with me which have appeared in various journals are to be considered as apocryphal, and that I can in no way assume responsibility for their content. My current state of health does not allow me to undertake conversations with gentlemen of the press; I will however not fail to accede to your wishes as soon as I have the strength to do so" (transl.).

Disenchanted with Lenin's regime and suffering from tuberculosis, Gorky had left Russia in September 1921, initially staying in Berlin; ultimately he was to settle in Sorrento, with an extended household which now included Moura Budberg, his secretary and lover. 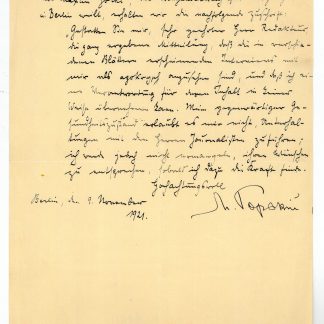