Beautiful example of high baroque love poetry written in an elegant cursive hand with calligraphed and coloured title, initals, and ornaments. This manuscript of this unpublished poem was dedicated to Giuseppe Pagani of the noble Pagani Cesa family from Belluno, with a dedication dated to 8 August 1645. The author Lodovico della Chiesa, probably a pen name and not to be confused with the like-named Savoyard historian, only appears as the author of one other manuscript, "Spine delle rose poetiche" from 1636, held at the Civic Library of Verona. In the title of the manuscript at hand, della Chiesa claims membership of the Accademia degli Umoristi, the most prestigious Roman learned society of the 17th century, which would have made him a co-academician of several popes, including Alexander VIII, scientists like Nicolas-Claude Fabri de Peiresc and Pietro della Valle, and poets such as Giovanni Battista Guarini and Giambattista Marino.

Binding somewhat stained, showing slight defects to the corners and margins. Some of the initials and ornaments affected by ink corrosion. The final 20 ff. with a continuous trace of worming, more pronounced near the lower cover but only affecting the calligraphed ornament on the final page. 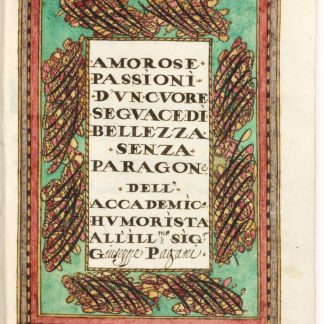