(Oblong) 4to. Together 4 pp. With papered seals.

All documents are recommendations "pro dispensatione pauperum" that were issued by dioceses on behalf of engaged couples who could not afford the marriage fees. The certificates could to be presented to the local priest who would waive the fees connected with the wedding ceremony.

Pietro Gioacchino Caissotti di Chiusano was the last commendatory abbot of the territorial abbey San Giusto. In 1772 Susa was erected as a diocese by Pope Clement XIV, and since then the former abbey church served as the cathedral of the new diocese. The documents are issued in his name but they bear the signatures of a Francesco Felice and a second church offical.

All documents affected by old water damage. The 4to document has a significant tear to the lower margin, affecting the second signature, and a deep vertical tear from the upper margin to the centre of the sheet, affecting most of the text. The three oblong 4to documents have tears resulting from water damage to the left margin, minimally affecting the text of one of the documents. 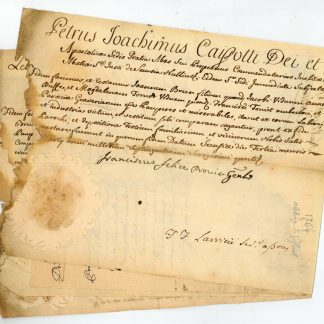