A footnote on three famous swords in Naples

4 to. 2 pp. on bifolium. With autograph address and traces of seal.

To the historian and librarian Francesco Cancellieri (1751-1826) with a requested copy of "the footnote on the three swords printed by Mr. Onorato Gaetani in Elogio Storico di Carlo III Napoli" and a description of the book's dedications to Carl IV of Spain and Ferdinand IV of Naples. In the second part of the letter, Agrado apologises for not being able to help Cancellieri with another request, giving a detailed description of related works in his library.

As stated in the letter, the copied footnote is on p. 70 of Onorato Gaetani's "Elogio Storico di Carlo III Re delle Spagne" (Naples, Stamperia Reale, 1789). Gaetani describes "three illustrious swords" in Naples, one that was given by Louis XIV to his grandson King Philip V of Spain, the sword of Skanderbeg that is now on display in Vienna, and the sword of Cesare Borgia, Duca di Valentinois, today at the British Museum. Cancellieri related Agrado's information in one of his published letters: Lettera del ch. Sig. Ab. Francesco Cancelliari al ch. Sign. D. Sebastiano Ciampi (Rome, 1821), p. 14.

With minor tears and some browning. 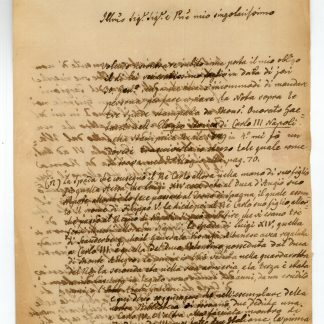