4to. 3 pp. on bifolium. With autograph address and traces of seal.

Highly interesting business letter to a Parisian banker who handled the sale of the famous Albani collection that had been confiscated by the French army, transferred to Musée Napoléon in Paris, and finally was restituted in 1815. The letter appears to be part of the final settlement for the "entirely completed sale" of the collection. Albani makes several revenue statements, mentions a bill of exchange for Geneva, "a tiny miscalculation of F. 50" in his disfavour, and the urgent collection of "F. 3000 from the purse of the King". Louis XVIII had bought 20 of the 59 antique marbles from the collection for the Louvre on 5 December 1815, including the famous "Minerva Albani". Only a few objects of the prestigious collection returned to its original owners, as underscored by Albani: "I also ask you to investigate whether the mentioned pieces are still in Paris and for when we can hope that they will be shipped to be transported to Rome". Prince Albani also mentions his brother Cardinal Giuseppe Albani, who was a co-owner of the collection that had been created by their paternal uncle, cardinal Alessandro Albani, with Johann Joachim Winckelmann serving as his art consultant and curator. Alessandro Albani also built the Villa Albani in 1760 to display his collection. It was likewise sold by his nephews to the Chigi family.

With a tear from breaking the seal. Minimal browning. 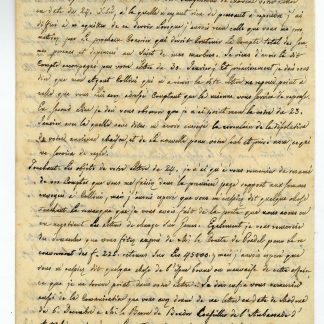