4to. 1¼ pp. on bifolium. With autograph address and traces of seal.

To the Parisian publisher Gabriel-André Dentu, concerning a problem with a Piemontese Count Provera. Apparently, Provera had stolen or embezzled two treatises that were "confided" to him by Dentu in 1813. Di Sostegno mentions that the Count had long-standing "financial difficulties because of bad business", which does not "justify his actions and particularly his silence". Although he points out that the French ambassador in Pavia is responsible for French "interests with Sardinian subjects", Di Sostegno offers to try to resolve the affair personally "in the manner that he can desire as much as you".

Carlo Emanuele Alfieri di Sostegno served as the Sardinian ambassador to France from 1814 to 1828.

Traces of folds. With some browning and a tear from breaking the seal. 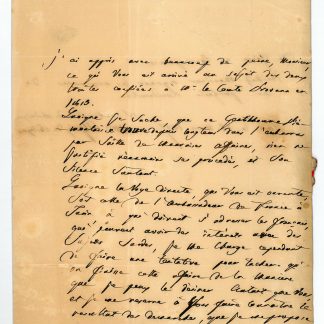