4to. Together 1½ pp. on bifolia. With autograph addresses.

Interesting letters of recommendation for the revolutionary and educator Marc-Antoine Jullien de Paris (1775-1848), who had been exiled to Italy at Napoleon's orders. One of the letters is addressed to the archaeloogist Filippo Aurelio Visconti, a member of the "Commission des monuments publics". Martorelli asks Visconti to provide Jullien with access to the archaeological treasures administrated by the commission.

The second letter is addressed to François Palombi, "membre de la legion d'honneur", as Martorelli "knows for certain" that Palombi "has the kindness to make him feel the effects of our friendship".

Marc-Antoine Jullien de Paris, who is introduced by Martorelli as a "highly learned man, author of various highly esteemed works", was a follower of Robespierre during the Revolution and was imprisoned for a year following Robespierre's downfall. He fought under Napoleon in the Italian and Egyptian campaigns but had to return to France due to illness in 1798. After brief imprisonment in 1798, when the Directory suspected him of Jacobin sympathies, and having served in various military positions, Jullien received the cross of the Légion d'honneur in 1803. A visit to Madame de Staël in 1810 raised Napoleon's suspicions of Jullien, who was briefly exiled to Italy and, back in France, was arrested in 1813 for his opposition to Napoleon's rule. During the Restoration, Jullien was primarly active as an oppositional publisher and educator. Today he is best known as the founder of comparative pedagogy.

Largely unknown today, Luigi Martorelli was a member of the "Commission des monuments publics" in Rome and published several works, including a history of the Vatican clergy (1792) and a history of usury (1809). 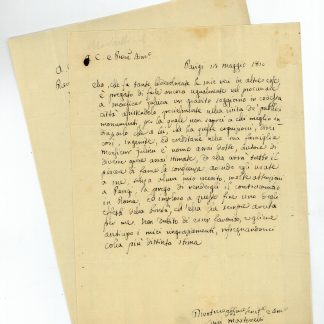