4to (175 x 224 mm). Persian manuscript on paper. 25 pp., each with 15 lines of black nasta'liq and ta'liq. With 48 pencil drawings heightened with gold. Contemporary brown morocco.

Al-Sufi's book, based on the Almagest of the Greek astronomer Ptolemy, concerns the 48 constellations known as the Fixed Stars. Commissioned by the Buyide emir, 'Adud al-Dawla, this treatise had a great impact on Muslim astronomy and was long considered a standard work of reference. The eminent astronomer Al-Sûfî wrote it in Isfahan around 965 CE. Ptolemy's treatise circulated widely in the Arab world thanks to the translation of Ishâq ibn Hunayn, prepared in Baghdad in the 9th century. Al-Sûfi's treatise would later be translated into Persian by Nasir al-Din al-Tusi in the 13th century. Thus, astronomical knowledge circulated in the Arab and Persian world thanks to successive translations and enrichments. 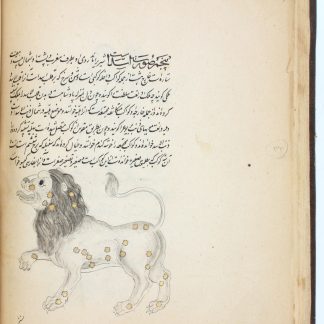