Impressive album of vibrant watercolours documenting an extensive journey from Shanghai to Sri Lanka via Hong Kong made by a female British artist, Frances de la Poer. The volume opens with a full-page depiction of a traditional Chinese lotus shoe captioned "The Brides shoe Shanghai Nov 30th 95", decorated with a sketch of two women in festive dress beneath a tree. The artist apparently had attended a wedding in Shanghai, as she also portrayed "The brides sisters" on the verso of the same leaf underneath a panorama of the Yangtze river crowded with junks. This latter watercolour is stated to have been drawn on deck of the Canadian ocean liner "RMS Empress of Japan", bound for Hong Kong. On 3 December, Frances de la Poer captured in an atmospheric watercolour the Lei Yue Mun channel ("Lymoon pass") that separates Kowloon and Hong Kong Island, followed by another river scene showing clothes drying on the shore of the Pearl River. The album continues with a portrait of two Chinese men in traditional attire and two more landscapes of the Pearl River (here captioned "Canton River") and its mountainous surroundings. On 13 December the artist had already reached Malaysia, as evidenced by an unfinished watercolour depicting a group of people with cattle. The journey continued on the German "Reichspostdampfer Preussen", documented in the caption of a stunning landscape of the Sumatran coastline from 16 December.

After a longer interruption, the Ceylonese section of the album starts with an impressive depiction of a lake near Bandarawela, dated 26 Jan. 1896. The artist explored the south of the island, painting a landscape in Badulla, a "lace seller" in Colombo, a river scene near a British fort, a young boy, a Buddhist stupa, acrobats in Yatawatta, huts in a village and a woman in Kandy province, a Tamil coolie working with tea and other labourers, but also a scorpion and, in pencil, a spider and lizards. Several drawings are also annotated in Sinhalese. A series of larger pencil drawings is followed by two final watercolours: a beautiful depiction of Galle Lighthouse, the oldest lighthouse on the island, and a charming scene on deck of the British ocean liner "RMS Ormuz", dated 22 February. 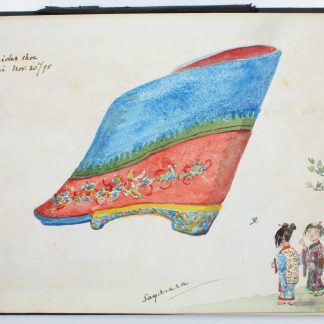