The earliest obtainable account of the first Dutch voyage to the East Indies, which ushered in the Dutch East India Company and the Dutch spice trade

Extremely rare account of Cornelis de Houtman's voyage to the East Indies, undertaken in 1595-97: a pioneering enterprise that initiated Dutch presence in the East Indies and set the standard for Dutch exploration, being organized by the "Company of Distant Lands", the immediate predecessor to the more famous Dutch East India Company (VOC), established in 1602.

This anonymous, first-hand journal, originally published in Dutch as "Verhael vande Reyse de Hollandtsche schepen ghedaen naer Oost Indien" (Middelburg, Barent Langenes, 1597), was the first printed account of the voyage. Two versions of the text appeared, of which the "Verhael" was the shorter, but also the earlier (cf. Rouffaer). Two editions of the German translation, by Conrad Löw, were printed in Cologne in 1598. No priority has been established, but both are now extremely rare: four copies of the edition published by Peter Reschedt are listed in USTC, while none of this Bertram Buchholtz imprint are recorded in USTC or elsewhere.

Houtman's voyage was motivated by the precariousness of Dutch access, as a result of the Dutch Revolt, to the largely Iberian-controlled spice and bullion markets. The Dutch therefore examined the possibility of sailing directly to the East in their own ships, and Houtman was first sent to Portugal in 1592 to investigate the spice trade. He returned two years later, urging direct voyages to the East, and in 1595 led the first such venture.

Houtman's fleet crossed the Atlantic to Brazil before rounding the Cape of Good Hope on 7 February 1595, then sailing across the Indian Ocean from Madagascar to the Sunda Straits. En route they touched on Sumatra, traded for a time in Bantam, a famously wealthy spice port, and made several other stops on the north coast of Java and on Bali. On the homeward journey, the fleet sailed along the south of Java. Houtman's brother Frederick, a talented astronomer who also participated in the voyage, greatly contributed (along with the Dutch navigator Pieter Dirkszoon Keyser) to mapping the southern skies, recording a great number of new constellations. "The voyage was not a financial success, and barely recovered its expenses. The nearly empty holds held only 245 bags of pepper, 45 tons of nutmeg, 30 bales of mace, and a selection of Chinese porcelain. The backers were aghast at the terrible loss of life [only 87 out of 249 men returned, and those who survived were too weakened even to bring their ships into anchorage]. But the voyage was, in another sense, a resounding success in that it showed to the Dutch that they might successfully reach the Indies. In the following year no fewer than 22 ships distributed over six expeditions ventured out, and the rush to the East had begun" (F. Swart, "Lambert Biesman (1573-1601) of the Company of Trader-Adventurers, the Dutch Route to the East Indies, and Olivier van Noort's Circumnavigation of the Globe", Journal of the Hakluyt Society, Dec. 2007). The Compagnie van Verre, which Houtman helped create, merged to form the Dutch East India Company. Houtman's voyage is now known for providing the initial impetus for the Dutch spice trade and colonization of Indonesia.

Lach notes that "firsthand reports of insular Southeast Asia arrived in the Netherlands with Cornelis de Houtman's fleet in August 1597. An anonymous 'Verhael vande reyse' was published [...] in 1597; it went through six editions in that year and the next, including translations into French, German, English and Latin". The published journals of the voyage "provided European readers with the most detailed descriptions of Java to date and with the first continuous description of Bali in any language. By sailing around Java, De Houtman's men were able to ascertain its true size and shape. They discovered that it was not nearly as wide from north to south as it appeared on Portuguese maps, and this was reported in the 'Verhael vande reyse'. This work also contains a detailed description of Bantam, its harbor, fortifications, buildings, people, and trade, the prices of products, and the foreigners who traded there" (Lach). The author of this account is an unidentified shipmate of Houtman's who describes in his own words what was the first incursion into the spice trade by the Dutch.

"The failure of the Barents expedition to open up a route to the East by way of the North East Passage led the Dutch to attempt reaching the East by way of the Cape Route. The Expedition consisting of 4 ships under the command of Cornelis Houtman arrived at Bantam in Java in 1596, where they tried to get a cargo of spices. But hostilities with the Portuguese arose and the fleet was compelled to sail on. The circumnavigation of Java was the first recorded attempt of this kind by any European vessel. Much knowledge of the regions later to become the exclusive territory of the Dutch resulted from the voyage" (Cox I, 262).

Rare institutionally, no copy of this edition is listed in any institution. Of the Reschedt edition, there are four copies, according to USTC (Staatsbibliothek Berlin; BSB Munich; Austrian National Library; New York Public Library).

A tall copy with light toning. In excellent condition. 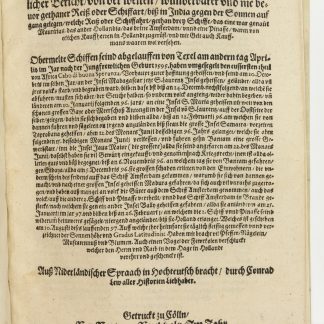