Italy, first half of the 18th century.

Extremely rare copy of Gigli's famous forged epistolary satire, written under the name of the Jesuit missionary and writer Antonio Maria Bonucci (1651-1728) and dated 9 September 1719. Both Bonucci and the purported recipient Antonio Caramelli, a Camaldolese abbot from Arezzo, were respected public figures, lending the letter an aura of authenticity and authority. Apart from comical elements such as fictional gossip, mockery of fellow friars, and the assertion that the letter is merely a copy, as the original "had been stolen from the bedside table", Gigli's satire serves to criticize the Jesuits and particularly the Collegio Tolomei in Siena, where Gigli had been a teacher himself. Indeed, the fictional Bonucci even mentions Gigli, alleging that he had received "secret contributions" from the Jesuits and that his children attended the college free of charge: "If Cardinal Tolomei had not taken them in, they would be begging now […]". The pitying tone of this dig at Gigli's notorious financial difficulties is another attempt to veil the true authorship of the letter while amusing those already in the know. Gigli's Bonucci has his own worries, as his fellow brothers are envious of his friendship with Pope Clement XI, who (according to the letter) had personally ordered him back from his mission in Brazil. Haunted by rumours of being a papal spy within the Jesuit order and appalled by the Roman intrigues, the fictional Bonucci expresses his wish to return to Brazil.

Between 1713 and ca. 1716, Girolamo Gigli had already written a series of letters in Bonucci's name from his Roman exile to amuse his friends in his native Siena. Those earlier letters focus on the global Jesuit mission and fantastical accounts of foreign people and lands while mocking the pretentions and hypocrisy of the Italian intellectual elite, especially the Florentine Accademia della Crusca. They were posthumously published as an epistolary novel, "Il Gazzettino". Appropriating Bonucci’s name for his letters eventually led to Gigli's arrest and prosecution, but he was quickly released thanks to his good connections and the fact that he had never admitted his authorship. The fictional letter at hand, dated 1719, was probably Gigli’s last use of Bonucci’s name.

Girolamo Gigli's original manuscript is held at the Biblioteca degl'Intronati in Siena (Cod. D.VII.12, 94). The letter was first published anonymously in Venice in 1767 under the title "Lettera inedita del Padre Anton-Maria Benucci, gesuita della casa Professa del Gesu di Roma. Al Padre D. Antonio Caramelli", with the note that the letter had "reached Venice on 30 July 1767". Another edition, containing several textual departures, was brought forward in 1847 by Pietro Bigazzi, who also provided a short commentary. Two years later Bigazzi was the first to make Gigli's authorship explicit in his "Miscellanea storica e letteraria edita per cura di P. B." (Florence, 1849). In his short text, Bigazzi ascertains the existence of two differing manuscripts, which could explain he discrepancies between the 1767 and 1847 publications. The manuscript at hand corresponds to the 1847 publication.

With some browning and foxing. 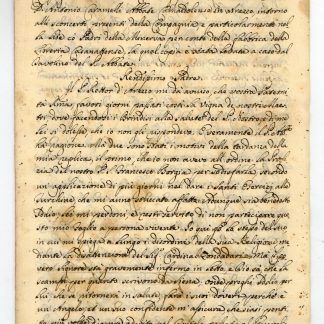