A series of letters to his Spanish-language publisher: "For now, I am on my way to London to visit the set of FAHRENHEIT 451 now in film production starring Julie Christie and Oskar Werner and directed by FRANCOIS TRUFFAUT"

Series of 11 typed letters and one postcard signed to Francisco ("Paco") Porrúa, his Spanish-language translator and publisher, beginning by thanking him for his copy of "Cronicas Marcianas" with the prologue by Borges ("my wife speaks highly of your careful and sensitive work on this [...] I await publication of EL HOMBRE ILUSTRADO, happily [...]", 6 Nov. 1955), the next speaking of his father's death but pleased at the reception of the "Martian Chronicles" ("Rarely have I been treated so well in my own country [...]", 39 March 1958), talking of writing a screenplay of "And The Rock Cried Out" directed by Carol Reed, the Jean-Louis Barrault adaptation of the "Martian Chronicles", and visiting the set of "Fahrenheit 451" directed by Truffaut, discussing the possibility of producing two of his plays in Buenos Aires ("a startling evening, of great contrast", 17 March 1962), asking for the publication of hardcover editions of his works in Spain (on a letterhead depicting the Illustrated Man, 24 Aug. 1971), sending a list of his works so they can be published in the right order, and other business matters: "Yes, I have written one other play which you have not seen. It is THE DAY IT RAINED FOREVER. I am sending you a copy under separate cover. I am happy to hear that you may publish a book of my plays, which would delight me. For now, I am on my way to London to visit the set of FAHRENHEIT 451 now in film production starring Julie Christie and Oskar Werner and directed by FRANCOIS TRUFFAUT [...]" (17 Feb. 1966). 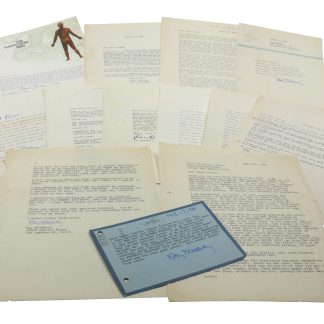