Typescript register of more than 400 Nazi party functionaries of the Reichsgau Styria in Austria, documenting the entire staff of the Reichsgau towards the end of the Nazi regime. The personal copy of Lieutenant Ernest Poole, attached to the Counter Intelligence Section of the British Military Occupation Force in Austria; his name in pencil near the upper right corner of the first page.

Several additions and corrections by hand. Small tears, rust stains and holes to upper left corner as a result of former stapling. A few small marginal flaws. A remarkable document of British intelligence from the Allied occupation of Austria. 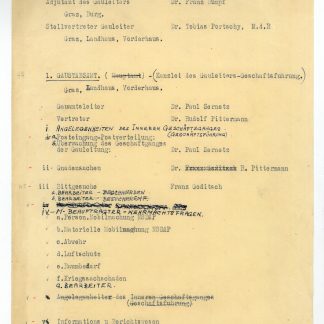