4to. Italian manuscript on paper. 2 pp. on a single leaf.

Typical short Jesuit eulogies, composed to be read in Jesuit colleges on the anniversaries of the deceased.

Paolo Segneri the elder (1624-94) was a highly popular orator, ascetical writer, and preacher of the Apostolic Palace. According to the eulogy, Pope Innocent XII and Cardinal Giovanni Francesco Albani, the later Pope Clement XI, held Segneri in high esteem. Francesco Maria Galluzzi (1671-1731) was a Jesuit preacher, hagiographer, and teacher at the Collegio Romano. For most of his life, Galluzzi led the Jesuit "Missione Urbana" in Rome that focused on the evangelization and catechesis of farmers and others who visited the markets of Rome. This work earned Galluzzi the epithet "Apostle of Rome". 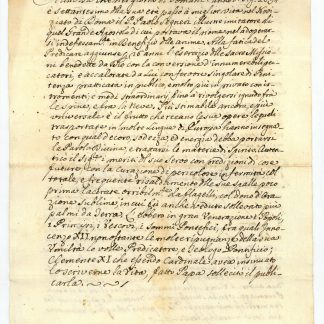