[Société archéologique de Béziers]. "Musée lapidaire. Aperçu général de l'histoire de Béziers." Manuscript for a general history of Béziers based on the objects of the Museum of the Archaeological Society.

4to. French manuscript in blue and red ink on paper. 107 pp. With an index and 68 photographs mostly outside the text (37 numbered plates). Original half cloth notebook. Sewn.

Beautiful, unpublished manuscript that must be attributed to a member of the Archaeological Society of Béziers. From 1866, the society’s "Musée lapidaire" was housed in the unfinished monastery attached to the Béziers Cathedral. Today, only a few of the more than 300 objects are still on display there, while most have been transferred to the Musée du Biterrois. The author traces the eventful history of Béziers based on objects of the collection and their inscriptions, dating from the Roman period to the 18th century. The objects from the Roman period offer the greatest variety; they include a head of Silenus, the statue of a Roman Emperor, locally known as Pépézut, funerary monuments and architectural ornaments. In the preface, the author thanks the former president of the Archaeological Society, Louis Noguier, and two other members who contributed to the establishment of the museum. In 1899, Noguier had published a book on the museum’s inscriptions from the Christian period. Based on a clipping from a local newspaper with an article on a congress of the Archaeological Society in January 1911, the manuscript can be tentatively ascribed to Joseph Dardé, secretary of the society and curator of the museum.

Several pages loose, as are the plates. Some browning. Occasional bent corners, margins, and minor tears. 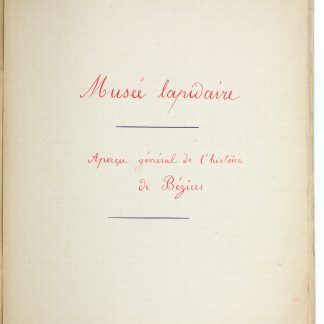