Impressive album of vibrant watercolours documenting the extensive Ceylonese journey of a female British artist, Frances de la Poer. The volume opens with a depiction of a "Madras Conjurer" in Kandy, performing the "great mango trick" with two cobras, wherein the performer gives the illusion of the sudden germination and growth of a mango tree (drawn from life and dated Kandy, 31 Dec. 1895). The second drawing shows a crowd gathered before a Buddhist temple in Kandy.

Setting out from Kandy, the artist explored the countryside, drawing landscapes in Yattawatta, the tea harvest on Coolbawn estate in Navalapitiya, a pandal in Bandarawala, the surroundings of Haldummulla, a verandah in Pelmadulla, two views of Adam's Peak, men riding elephants in Ratnapura, the famous Elephant Rock (Ethagala) of Kurunegala, and four impressions from the beaches of Bentota. The final watercolour in the album is a beautiful impression of a beach sunset, dated 18 February 1896. 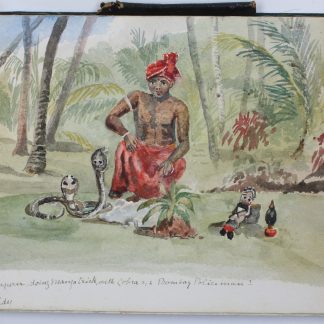