A rare Viennese fortification manual by a military engineer, during the Ottoman siege of Candia

Extremely rare sole edition of this guide to fortification, written by a French sapper who had served in the Venetian navy during the Ottoman Siege of Candia (1648-69), in Crete. In his 40-page preface "au lecteur", Poullet writes at length about his experiences as a military engineer during the siege (illustrated in two half-page plates in text), and even includes 'attestations' in Italian of his military service under Marcantonio Giustiniani, dated from Zante (Greece), 1st March 1670.

Writing shortly before the Siege of Vienna in 1683, Poullet expresses the hope that his manual incorporates some of the lessons learned from the 21-year battle for Candia - seen as an impressive feat of resistance, despite ending in defeat for the Venetian forces. His illustrated examples of fortifications constantly refer to the best methods for fighting 'les Turqs' and the mistakes made in Crete.

With a handful of early manuscript corrections in text; plate 11 printed upside-down; head of spine with some loss, crudely repaired; internally one or two discreet wormholes, otherwise a very good copy.

A rare survival: OCLC shows just 5 copies worldwide (none in the US or UK); KVK adds one further, at the Austrian National Library. The copy at the Czech National Library is lacking one leaf of prelims. 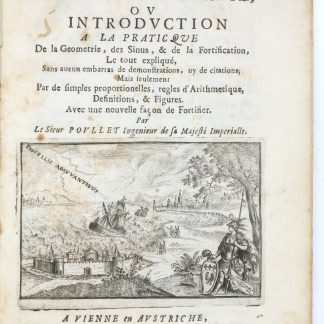