From the first printing press in the Arab world

Folio (141 x 42,5 cm). Five folio leaves, printed in French and Arabic in two columns and pasted together vertically to form a single broadside.

Menou, who succeeded Kleber at the head of Egypt as general-in-chief, following Kleber's assassination in June, converted to Islam and took the name of Abdallah. Unlike most announcements published by his predecessor at the same press, the present proclamation is not headed with the motto of the French Republic, but rather with the Shahada ("There is no deity but God, Muhammad is the messenger of God") in both languages. Menou continues to set out his principles for a good government for Egypt, emphasizing his firm stand against abuse and corruption in the local administration of taxation, justice and the police, and finally threatens any attempt at rebellion with severe retaliation.

An important document from the first printing press in Arab world, of the utmost rarity due to its sheer size and ephemeral nature, according to OCLC recorded in four copies only: "The expedition of Napoleon Bonaparte to Egypt from 1798 until 1801 was a prelude to modernity. It was to change permanently the traditional Arab world [...] The French brought Arabic typography to Egypt, where it was practised under the supervision [...] of Jean Joseph Marcel [...]. Only a few days after the French troops landed [...] they set up the Imprimerie Orientale et Française there. It was an extraordinarily important turning point. For, leaving aside the Hebrew printing presses in Egypt of the 16th to the 18th centuries, until this date announcements and news adressed to Arabs there, as well as in other parts of the Arab-Islamic world, had been spread only in hand-writing or orally, by criers, preachers or storytellers" (Glass/Roper).

Traces of folding, but uncut with temoins. A surprisingly fresh survival. 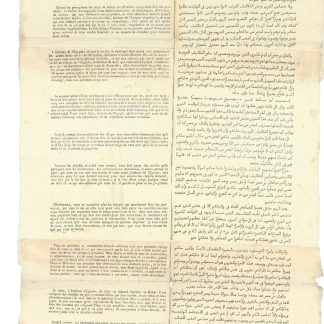