[Hydrographic Office]. Islands in the Southern Portion of the Red Sea. No. 453.

Nautical chart of some of the main islands in the Red Sea, displaying Jebel Jukur and the Hanish Islands, prepared by the British Admiralty. With 2 inset maps of the Zebayir Islands and the Abu Ali Channel.

The main chart details the 23 islands and rocks of the Hanish Islands, administered by the Italian colony of Eritrea from 1923 to 1941 (when Italy left Eritrea, administration was carried on by Britain). The Zabayir archipelago, featured on an inset map, is a group of 10 major volcanic islands rising on top of an underlying shield volcano and reaching a height of 191 metres above sea level. The second inset map of the Abu Ali Channel includes a large portion of Jebel Zukur.

The British Admiralty has produced nautical charts since 1795 under the auspices of the United Kingdom Hydrographic Office (HO). Its main task was to provide the Royal Navy with navigational products and service, but since 1821 it has also sold charts to the public. The present chart was composed after an Admiralty survey of 1881/2; it was first published in 1883 and saw several corrections up to 1928. 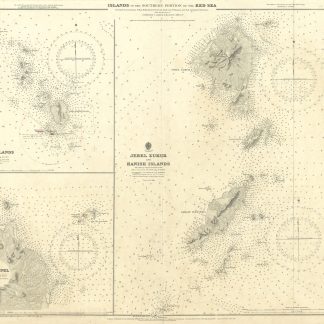