Unaltered vintage print of an iconic image, with the signature of the first Arab photographer of Mecca still present

Album with 50 albumen prints of scenes in Algeria and Tunisia, made by an unknown photographer. Most of the photographs have a caption naming the place photographed, but only 5 indicate place of production or publication of the photos. These were all produced in Tunis, at least some by the French photographer J. Garrigues, printed and published at his studio. Notable photographs in this album are the first, showing a veiled woman, a barber at work in the streets, riders on their horses, camels with riders and luggage, the Notre Dame d’Afrique in Algiers. Other subjects include city views, (fairly) candid photos of people in the streets, landscapes and the exterior and interior of a mosque.

The most remarkable print in this album actually does not fit in with the other images of places in North Africa. It is a photograph of pilgrims before the Great Mosque and Kaaba in Mecca, modern day Saudi Arabia with a caption in Arabic. This photograph was taken by the first Arab photographer Al-Sayyid ‘Abd al-Gaffar ca. 1887, making it one of the first photographs of Mecca. The present album contains this picture in its original form, including the Arabic caption. An edited version of the photograph (in which remnants of the Arabic caption are visible) can be found in Hurgronje’s "Bilder aus Mekka".

With a small Antwerp bookseller’s ticket on the front paste-down. The binding shows some signs of wear, slight foxing/browning of the outer edges of the paper boards (not affecting the photographic prints), some prints have slightly faded edges, which does not interfere with the actual image. Overall in good condition. 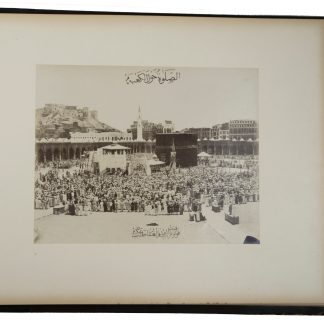