4to. 161, (3) pp. With numerous black-and-white illustrations in the text. Original printed wrappers.

First edition. Report on the Danish archaeological expedition to Kuwait led by Peter Vilhelm Glob and Geoffrey Bibby. During five campaigns between 1958 and 1963 the tells on the south-western corner of Failaka Island became the focus of the expedition. The report describes and illustrates some of the major finds, including statues, pottery, lamps, coins, remnants of houses and temples, skeletons and weaponry.

Each campaign lasted 2½ to 3½ months, and the excavation teams consisted of between 5 and 14 Danes as well as 2 Kuwaitis from the Education Department, assisted by up to 185 labourers. At the end of each campaign the finds were packed down in large wooden crates and shipped to the museum in Aarhus for conservation and analysis. At that time there were no conservation and storing facilities in Kuwait, nor anywhere in the Arabian Gulf. 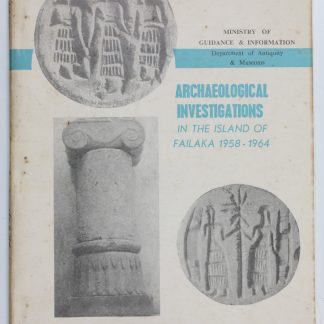