[Brooklyn]. Deed from William Morris and wife to the Corporation of New York. Signed by William and Rebecca Morris.

Original deed of the first substantial purchase of land on the Brooklyn side of the East River ever made by the New York municipality, a purchase that was called by Henry E. Pierrepont (1808-88), director and historian of the Union Ferry Co., "the foundation of the claim of the City of New York to their land in Brooklyn" (23). After the capture of New Amsterdam from the Dutch in 1664, a municipal government had been formed, the Corporation of New York, while across the water, "Breuckelen" (as it was then called) long remained an independent, rival city on its own.

"As early as the 12th of October, 1694, the Corporation of New York purchased from William Morris, for no specific consideration, his hourse, barn and premises, situated at the 'Ferry', on Long Island. The house stood on the north side of the road, opposite the present Elizabeth Street, about one hundred feet from the then shore of the river" (Pierrepont, 16ff.). The site was then known as "Brookland Ferry", the place where George Washington escaped with his troops after the Battle of Long Island. It adopted its modern name, Fulton Ferry, when in 1814 Robert Fulton established the first steam ferry route connecting Manhattan and Brooklyn, which played such a major role in their shared history and evolution.

Incipit: "This Indenture, made the twelfth day of October, in the sixth year of the reigne of our Sovereigne Lord and Lady, William and Mary, by the grace of God, of England, Scotland, France, and Ireland, King and Queen, defenders of the faith etc., and in the yeare of our Lord one thousand six hundred ninty and four, between William Morris, now of the Ferry, in the bounds of the towne of Breuckle, in Kings county, on Long Island, gent., and Rebecca his wife, of the one part, and the Mayor, Aldermen and Commonalty, of the City of New York of the other part [...]".

Two copies of the deed would have been made, and this appears to be the deed retained by the Morris family and heirs, with an early note indicating that it was also "recorded in the Office of the Town of Clerk of City of New York in the Book of Grants". Pierrepont, writing in 1879, was still able to locate the City's copy at the Office of the Comptroller, where it may have remained until 1910, when such documents were transferred to the New York State Library; it probably perished in the notorious archive fire of 1911.

Gabriel Furman, Notes, Geographical and Historical, Relating to the Town of Brooklyn, in Kings County on Long Island (Brooklyn, 1824), Appendix A, pp. 102f. (published in part). Henry Evelyn Pierrepont, Historical Sketch of the Fulton Ferry, And Its Associated Ferries (1879), pp. 16-23. 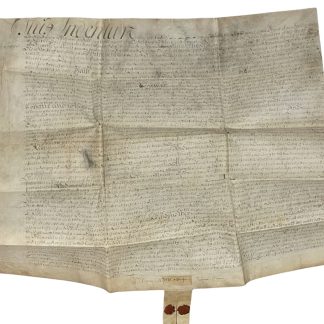