Pirated edition of Aretino's "comedie" (the first appeared 1553 in Venice) printed by one of the most rebellious and outspoken of all the Elizabethan printers. Wolfe's production was in all probability chiefly destined for the European continent, as all of Aretino's works had been on the Roman Index since 1558; copies were offered for sale at the Frankfurt Book Fair of 1589. Aretino's comedies are considered the best of his works. They rank among the great works of Renaissance drama, and many of their leading characters were prototypes for later playwrights. ‘La Talanta’, for example, prepared the way for Shakespeare’s character Falstaff. "[U]n frontespizo particolare ad ogni comedia [...] ha al fine una Lettera dell'Aretino a Daniele Barbaro" (Gamba).

One gathering misbound, but a nice complete copy. 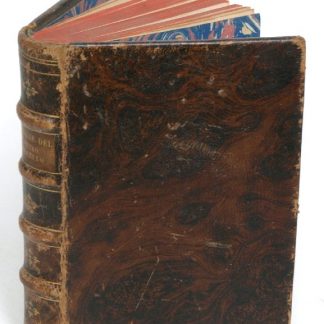