First edition of the score for "War and Peace" (op. 91; after Tolstoy's novel), published posthumously in 1000 copies. The present copy includes an additional autograph musical quotation by the composer. The libretto, also printed here, was written by Prokofiev himself with his second wife, Mira Mendelson. The opera, written in 1941 and extensively revised between 1946 and 1952, accompanied the composer throughout the last twelve years of his life: "The outbreak of the war gave impetus to a project Prokofiev had sketched out in spring 1941, for an opera based on 'War and Peace'. His initial plan for a small-scale, intimate opera which would highlight the personal dramas in the novel was expanded, by the war aspects in particular, and [...] in August 1941 he began the music [...] The following April, he finished 'War and Peace' [...] He sent the score of the opera to Moscow for approval, and in the meantime began its orchestration [which he completed] in March 1943 [...] Following the advice of the Committee on the Arts in Moscow, Prokofiev had drastically revised the opera in the process; the war scenes had been extended and the patriotic elements strengthened. It was no longer an intimate opera but an epic and heroic work. Prokofiev's incentive in revising the score was the promise of a production of the opera at the Bol'shoy at the end of 1943, for which Eisenstein was to design the sets [...] But, as had happened so often, the performance was first cancelled, then postponed indefinitely. Throughout the rest of his life Prokofiev continually made revisions and additions to 'War and Peace', including the composition of two new scenes, in a series of attempts to secure performances. It was only in 1957, however, after his death, that anything like a complete version of the opera was staged" (New Grove). When the Central Committee accused Prokofiev of "formalist perversions" in 1948, "War and Peace" was among the works to which the Communist Party took particular exception. 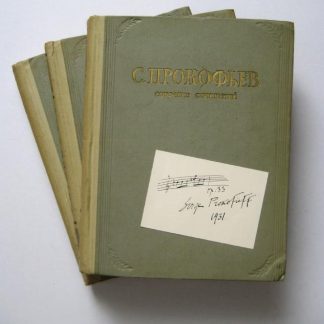