Plate volumes of the rare luxury work on the "Opéra Garnier", the neo-Baroque Parisian opera house completed in 1875, one of the most admired buildings of its time. The plates depict plans, cross-sections and elevations of the building, engraved in great detail after drawings by Duchamp, Jasson, Riquois and others. The beautiful chromolithographs (including the famous staircase) convey a vivid impression of the luxury and splendor of the interior decoration. Garnier's name became instantly famous when in 1861 he was unanimously awarded the first prize for his competition design for the new opera. His opera house, which cost the then unheard-of sum of 50 million francs, still constitutes the unsurpassed centerpiece of modern Parisian architecture (cf. Thieme/B.). To the plates were added four volumes of photographs by Durandelle and Garnier's monographic text volume (not present here). 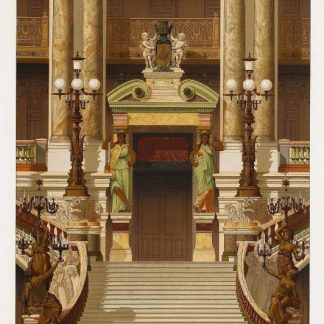