Large 4to. (4), 273, (1) ff. Typescript with numerous autogr. deletions, insertions, and revisions in pencil (autogr. insertions also typed and tipped in) and with insertion markings in red pencil. With punched holes, bound between cardboard covers.

Original typescript of the autobiography of the English geographer and explorer Augustine ("August") Courtauld, published in 1957 as "Man the Ropes". Born into a wealthy Essex family of textile merchants, Courtauld spent typically unhappy school days at Charterhouse (a 1918 anecdote, describing an excessive beating for the waste of bread, precisely mirrors a contemporaneous scene at Gresham's School described by the slightly younger Stephen Spender in his memoirs), his years at Trinity, Cambridge, and especially his expeditions to ice and sand deserts, his voyages, his war service in the Coastal Forces, and his last years as an Essex politician.

Courtauld was dedicated to exploring the world's uncharted deserts, and as early as 1926 had visited Greenland with the great Scottish explorer James Wordie. In 1927/28, he explored the Southern Sahara with the later Lord Rennell, only barely surviving an attack of dysentery. Most famously, Courtauld spent five winter months as solitary keeper of the weather station his expedition had set up on the Greenland ice cap, 110 miles north of Ammassalik, at minus 64 degrees. The "British Arctic Air Route Expedition" of 1930/31, led by Gino Watkins with the plan of finding a short air route to Western Canada, had received material support from Courtauld, whose family helped finance the undertaking. In 1935, Courtauld returned to Greenland, where he was the first to climb Mt. Hvitserk (Gunnbjørns Fjeld), the highest mountain in the arctic at almost 3,700 meters. Courtauld was considered a brilliant navigator, and his numerous cruises took him everywhere from Mallorca to Trondheim (he once took along Evelyn Waugh to Northern France, but Waugh soon defected due to continuing bad weather). With the coming war, Courtauld explored the Northern coast of Norway for the British naval intelligence; against the resistance of the admiralty, he formed the "Royal Naval Volunteer Supplementary Reserve" and supported the British commando units in Norway. After the war, he attempted a transatlantic voyage to America with his yawl, but was prevented by bad weather. Still, the winter of 1947 was spent in Ian Fleming's Jamaican villa, where his son could recuperate in the Caribbean waters after a severe bout of Polio. In his 49th year, Courtauld himself developed Multiple Sclerosis. At the Zeileis sanitarium in Gallspach near Grieskirchen (Upper Austria), where he spent his last years in treatment, he penned the present memoirs, which he lived to see published. A comparison with the printed text shows that the typescript underwent further editing - probably by the publishers, Hodder and Stoughton. The author's notorious understatement would seem even more pronounced in the ms., confirming the appraisal of his travel companion, Francis Rodd (Lord Rennell): "He was no linguist, but made himself understood." Courtauld died on 3 March 1959 and was buried at sea. Dorothy Middleton recognized the versatile Courtauld as an explorer "who could have been more famous if he had been less modest and (perhaps) less of an individualist" (The Geogr. Journal 146/3 [1980], S. 446). More than two decades after his death, Nicholas Wollaston published the biography, "The Man on the Ice Cap". In the fall of 1959, Courtauld's widow Mollie married Richard Austen ("Rab") Butler of Saffron Walden (1902-82, Chancellor of the Exchequer, Home Secretary and Foreign Secretary; widower of Courtauld's cousin, Sydney Courtauld Butler) and celebrated her 100th birthday in 2007.

Occasional slight browning; edges somewhat wrinkled. Altogether well-preserved, complete typescript of the autobiography, probably the final draft as revised by the author himself. 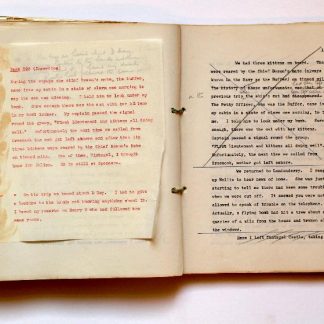