Contemporary handwritten copy of the poem that mourns the Duchess Louise of Hesse-Darmstadt, the "Saviour of Weimar", who had passed away on 14 February 1830. The present copy shows slight departures from the printed text: indeed, as the published poem appears to be a corrected and improved version of this manuscript, the latter may even precede the print. Published anonymously in issue no. 24 of the first year of the journal "Chaos", edited by Goethe's daughter-in-law Ottilie, the poem is attributed to the young Irishman Charles Des Voeux (1802-33), who studied classics at Oriel College in Oxford from 1821 to 1825 before going to Weimar, where he quickly learned German. In 1827 he translated Goethe's "Tasso" into English, and he was close to Ottilie (who is said to have been in love with him) and her journal, to which he contributed repeatedly. The poem is considered "the only German poem by an English-speaking contributor to Ottilie's 'Chaos'" (Hennig, 115). "The 'Nachruf' in question is of very high order both in form and matter [...] If Des Voeux could write such German, he was indeed fully qualified to undertake the translation of 'Tasso'" (Willoughby, 234). 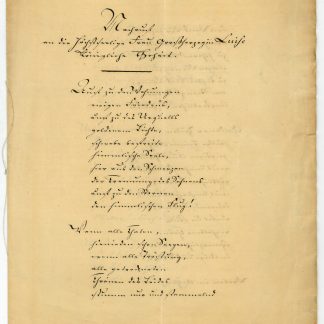