Amusing and detailed letter to John Kenyon (1784-1856) from St. Peter's College, Cambridge: "You should have had an earlier reply to your kind letter, but the fact is, I have been moving about, and it and its much prized accompaniment only reached me a few days ago; accept my best thanks, my good friend, for both; the latter has not only surprised but delighted me. I say, surprised, because I did not know you had a single acre of land on Parnassus, & behold you turn out to be a rich proprietor. To be serious I have read your Poem with great pleasure, not only because it possesses much Poetic merit, but because it is something new 'in his temporibus' and carries one back to the days of Pope, and other 'Reasoners in Rhyme' - 'When sense to fancy near, like light and shade / Each chasing each, their due succession made.' Poetry must at all times be much under the influence of imagination, but of late years it has been too much so, and that is one powerful cause why it has, as an object of literature, got a good deal into the background. But let us hope that under your instrumentality, the Muses may be wooed in a different strain, from that in which they have lately been sought [...] It is commonly said that at a certain age the Nine begin to look cool on their 'old worshipers', and that they do not like grey-headed old fellows in fact: under this impression it was that I lately took a somewhat formal leave of them, in an address which you shall see when we next meet. Whether they will have anything more to do with me, I know not; thus much I do know, that several of them are rank Quoquets - as for Thalaia, I believe her to be no better than she should be: but pray do not you tell her so, next time you meet as I should not like her to cut me, altogether, bad as she is. Mrs. Ainslie and myself have for a short time been at this place in Berwickshire, it belongs to my brother, and is in the heart of a fine shooting, hunting, and fishing country, but these are amusements I now partake of with great moderation, and do not think I shall like Somerville write a Chase, or like Sir Humphrey Davy, give to the world a work on Salmon fishing. Our weather gets bleak, and I have taken a strange fancy to an 'easy' chair not far from the fire side, and which gives me the light at my back, in the most agreeable manner you can imagine. We prepare as usual wintering in Edinburgh, and I think it probable that I may take a run up to London in the Spring [...]".

Sir Whitelaw Ainslie served as a surgeon in the East India Company for almost thirty years and wrote the first English monograph on Indian Medicine ("Materia Medica of Hindostan", 1813).

The classicist John Kenyon, who had long dabbled in poetry, published his "Poems: for the most part occasional" in 1838. The collection was received by critics as being in the mould of Pope and Cowper. The verses quoted in the letter are from Kenyon's "Rhymed plea for tolerance in two dialogues", to be published in 1839. 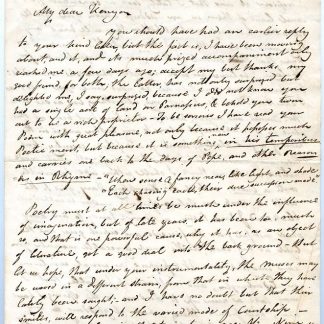