Popular collection of classical quotations based on the Adagia of Erasmus, edited by the Venetian humanist and printer Paulus Manutius (1512-74) and first published posthumously by the Aldine press in 1577. Of the several reissues, this is the last one to be published in Germany.

Browned throughout due to paper stock. With an additional dedication leaf (dated 1614) bound before the title, designating this volume a prize awarded at the Olomouc Jesuit Academy, a gift from Cardinal Francis Dietrichstein (1570-1636), whose arms adorn the calf-bound covers. Later in the library of Princess Maria Benigna Francisca Piccolomini (1635-1701), daughter of Duke Julius Henry of Saxe-Lauenburg; gifted to the Piarist college in Schlackenwerth (now Ostrov, Czech Republic) with handwritten exlibris note (ca. 1701) on the title-page. Founded in 1666 by Anna Magdalena, Duchess of Saxe-Lauenburg, the Schlackenwerth college was disbanded in 1876 and its library dispersed. Versos of title and dedication lead have ink stamp "Bibl. Wireniana Solåkraensis", indicating the Swedish collector Erik Gabriel Wirén (1877-1958) of Stocksund. His vast library was dispersed in 1959 by the Stockholmer rare book dealer Thulin (cat. 46). A 20th-century provenance note in Swedish is pencilled on one of the flyleaves. 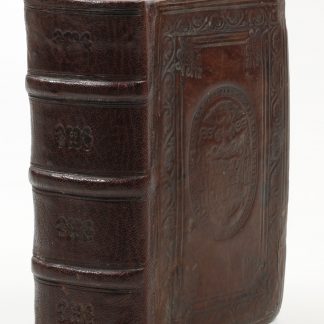