The British Empire's cavalry in Constantinople

Interesting collection of original English military correspondence from the Crimean War. The documents, mainly from the cavalry, comprise petitions of officers and veterinary surgeons, instructions for troops and sanitary personnel, reports of sanitary inspections (examinations of newly arrived horses, shooting of injured animals), hygienic conditions and measures (construction of latrines), disciplinary measures (theft, leaving battle without permission, remaining at night on the opposite side of the Bosporus, failure to appear at parade), letters regarding the return to England, etc. Among the signing officers are important commanders such as Sir James Yorke Scarlett (1799-1871), James Bucknall Estcourt (1802-55), Lord George Paget (1818-80), etc. 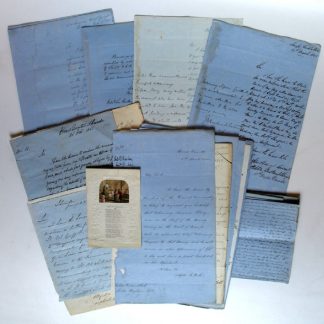