[Franz Ferdinand, Archduke of Austria (1863-1914)]. Collection of 8 menus and an operetta programme.

Stiff cards with the Imperial arms stamped in blind. 11 x 16 cm each.

Lithographed menus for déjeuners, soupers, and diners dating from 10 through 16 September 1906, during the Archduke's visit to Dalmatia, where he witnessed the Austrian Navy's manoeuvres.

The first menu is inscribed on the verso with two pencilled seating plans for the souper on Sept. 10 and the déjeuner on the following morning, indicating the place of the unidentified collector relative to those of Archduke Franz Ferdinand (at the head of the table), the Archduke's chamberlain Karl v. Rumerskirch, orderly officer Count Hartig, aide-de-camp Major v. Brosch, and (for the déjeuner) the governor of the Austrian Littoral, Prince Konrad zu Hohenlohe-Schillingsfürst, who joined the party at Divacca. Further travellers were navy commander Moritz Huber, court secretary Urpani, court purser Zeller, and court physician Dr Eisenmenger: Huber, the ranking officer among the four commoners, appears as the most likely candidate for the collector of this ensemble. Since the special train left Vienna at 7.35 pm, the first souper was probably consumed in the dining car aboard the train. 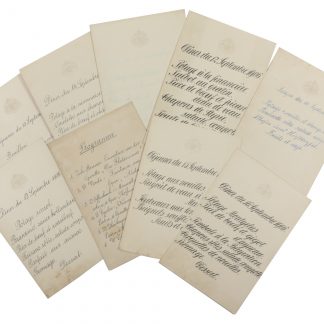