Third edition of this wartime map of the Bushehr area on the southwestern coast of Persia, on the Arabian Gulf. The city was occupied by British troops during the Anglo-Soviet invasion of Iran; these were replaced by American soldiers in 1942, who installed a military supply route for the Soviet Union through Iran (the "Persian Corridor"). Interestingly, the present map was copied by the German Luftwaffe as early as 1942 and distributed as "Weltkarte 1:1.000.000 (Iran) / H-39/G-39, Bushire. Hergestellt im Auftrage des Generalstabs des Heeres, Abt. für Kriegskarten und Vermessungswesen (II)". 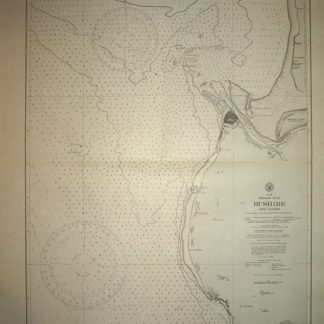