Rare Post-incunable describing of 'German' Europe in the early 16th century, and an early Americanum as well

At the same time an edition was published in Nürnberg by Petreius (VD 16, P 2905); at least 10 further editions appeared in the course of the 16th century.

Willibald Pirckheimer (1470-1530) was a German Renaissance lawyer, author and Renaissance humanist, a wealthy and prominent figure in Nuremberg in the 16th century, and a member of the governing City Council for two periods. He was the closest friend of the artist Albrecht Dürer who made a number of portraits of him, and a close friend of the great humanist and theologian Erasmus. Pirckheimer was educated in Italy, studying law at Padua and Pavia for seven years. He was a member of a group of Nuremberg humanists including Conrad Celtis, Sebald Schreyer, and Hartmann Schedel (author of the Nuremberg Chronicle). He also was consulted by the Holy Roman Emperor Maximilian I on literary matters. He translated many classical texts into German (as well as Greek texts into Latin), and was a believer in translating 'by the sense' rather than over-literally, a great question of the day. Among other works, he edited and had published an edition of Ptolemy's Geographia in 1525 (reprinted in 1535, 1540 and 1541), which greatly impressed Erasmus: a good preparation for this treatise in which Pirckheimer tries to located the cities, rivers and mountains in Europe, mentioned by classical authors like Ptolemy, Plinius, Caesar, Tacitus and others, and to identify them with 16th-century names.

Good copy.- (Title-page restored (no loss of text or title border); id. the corner at top of f. 2; some marginal duststaining in first leaves). 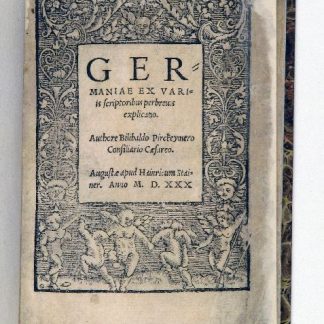