Second edition of Goethe's principal scientific work, the "Farbenlehre" (Sämmtliche Schriften, vols. XX-XXIII, with half titles), including the quarto-sized "Erklärung der zur Goethe’s Farbenlehre gehörigen Tafeln" and the "Anzeige und Übersicht", which is also usually found missing. "Goethe's first publication on optics culminated in his 'Zur Farbenlehre', his longest and, in his own view, best work, today known principally as a fierce and unsuccessful attack on Newton's demonstration that white light is composite" (DSB V, 445). In 1810-17, Geistinger published a pirated edition of Goethe's works; the "Farbenlehre" was issued both separately with its own title page and as part of the collected works. The scarcity of Geistinger's edition (the only one published during the author's lifetime to include the "Farbenlehre") is dicussed by K. Dorn in his article "Habent sua fata libelli", in: Aus dem Antiquariat 1988, p. 379f. Goethe counted this edition of his works among the good ones, but himself owned only an incomplete copy.

Much rarer than the edition published in 1810: not in ABPC auction records since 1975; OCLC lists only two copies (Johns Hopkins Univ., San Diego Univ.).

Slightly browned and brownstained; plate volume foxed; plates trimmed and mounted on backing paper. A very nice copy with old ownership stamp from a school in Tulln/Donau on flyleaf of plate volume. 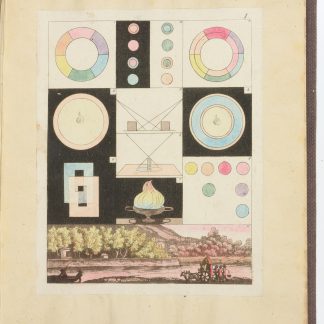