Lovely commemoration of the Imperial success against the French at Acqui Terme in Piedmont, printed in gold and in a gold-brocade wrapper

4to. Title page, (8) pp., final blank f. With woodcut arms (intended as those of the Holy Roman Emperor Francis II) on first leaf. Printed in gold throughout. Set in roman type with incidental italic. Gold-brocade decorated paper wrappers, showing an embossed floral pattern (also including grapes) with hunters, a wild boar, deer and dogs scattered through it, in gold, orange, yellow, lavendar and blue. The paper used to make the wrapper is decorated on both sides (from the same block and with the same colour pattern, but with the the whole on the inside upside down) and another piece of the same decorated paper has been used to reinforce the inside of the fold. In modern clamshell box with red morocco spine label.

Verses celebrating the repulsion of the French from the walls of Acqui Terme in Piedmont (between Torino and Genoa) by Habsburg Imperial forces on 17 May 1799 during the War of the Second Coalition (1798-1801). It collates: [A]6 = 6 ll., with only the woodcut arms on A1 (verso blank), the title-page on A2r, a "Madrigale" on A2v, 4 numbered poems on A3r-A4v (the first titled "Sonetto" and the fourth explicitly referring to the military confrontation at Acqui Terme on 17 May 1799) and a "Canzone" on A5r-A5v. A6 is blank. Although the imprint explicitly indicates that it is from Arcasio's printing office and that he is printer to the city of Acqui Terme ("Acqui[:] nella stamperìa di Gio Francesco Arcasio stampatore dèll' illustrissima città."), ICCU records no other work under his name and no other publications at Acqui Terme between 1622 and 1805. It records only one other copy of the present work (at the Biblioteca Federico Patetta at the law department of the University of Torino) and neither it nor the library's own catalogue indicates whether it is printed in gold (nor does it describe the binding). That copy may also lack the initial leaf with the coat of arms and its blank conjugate. We have located no other copy. The book must have been printed in a very limited press run. It is dedicated to the general of the Imperial troops, "Baron de Sekendorff", perhaps the successor to Generalleutnant Carl Friedrich Freiherr van Seckendorff (1736-1796). The author calls himself "Regio Segretaro della Prefettura, ed Accademico Torinese". The arms on the first leaf are clearly intended as the arms of the last Holy Roman Emperor, Francis II (reigned 1792-1806). They show a crowned double-headed eagle with a coat of arms on its breast, but the arms on the breast are somewhat roughly rendered and appear to be in mirror image.

The printing shows through the paper slightly, but both the book and the wrapper are in fine condition, with only slight soiling to the wrapper and a couple very minor stains at the foot margin of the last printed page. An extraordinary and extremely rare piece of occasional printing from the War of the Second Coalition: only one copy on ICCU; not in WorldCat. 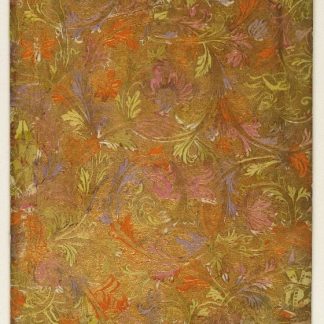