Stevens, Meg. A collection of 15 original watercolours, all showing Arabian horses (all captioned with the name of the horse). Partly signed ("MJ Stevens") and dated. All matted and housed in half-leather box with gilt title to spine. Folio (35 x 30 cm).

An outstanding collection of original watercolours by Meg Stevens, containg a view of Wentworth Park as well as of Enys Park and numerous portraits of the most famous Arabian Horses bred there, several painted at the Arab Horse show in Islington, March 1938. The collection also includes the original watercolour used for the front cover illustration of The Arab Horse Society News, No. 75, and is topped off by a charming oriental street scene.

Stevens's possibly most famous work is the watercolour used for the cover illustration of Greely's "Arabian Exodus", one of the principal works on the subject of Arabian horses, first published in 1972 (while her watercolour was produced as early as 1940). As the owner of the Pelere Arabian Stud, Stevens was both a highly respected breeder of Arabian horses and a gifted artist. Born in Penryn in 1903, she received her early tutelage from her mother; this was followed by spells at the Slade and Lucy Kemp-Welch's school at Bushey in Hertfordshire. 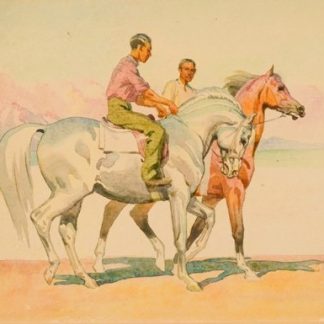