First edition. Most of vol. 1 was printed in Brno as early as 1741. According to Wurzbach, the author "refrained from attacking the Jewish community with the customary polemics". The Moravian priest Roblik (1689-1765) resigned his office so as to dedicate all his efforts to the conversion of Jews. This goal he aimed to achieve by the power of argument and Christian charity alone, attacking the teachings of Judaism only, on individual Jews, as he hoped the "truth" of the Christian doctrines would become apparent once Rabbis and Talmud no longer obscured them. Volume two constitutes a revision (minus the Hebrew quotations) of Eisenmenger's notorious "Entdecktes Judentum" ("Jewry Discovered"), the original edition of which, published in 1700, had only been re-released by censorship.

Binding rather rubbed and bumped at extremeties; damage to spine ends and front hinge. Some browning and waterstaining throughout. Slight paper defects to double-page-sized plate at beginning of vol. 2. Title remargined at top; library stamp of the Budapest Franciscan monastery. 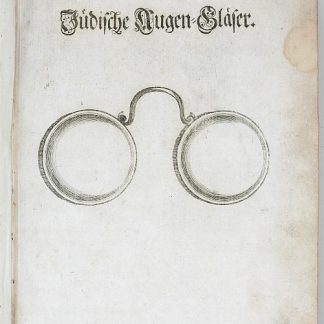