A very long and comprehensive letter to Franz von Pfistermeister, cabinet secretary to Ludwig II of Bavaria, on preliminary works for a Festival Theatre for Wagner in Munich. The project was pursued for a few years but ultimately not realised. Ludwig decided to build the theatre in Weimar instead of Munich; nevertheless, Semper's original drafts were used (albeit without the architect's permission). In his letter, Semper gives a very detailed account of the central position of the orchestra, the stage, and the auditorium. He refers to Wagner, with whom he had discussed the project, and his ideas for interior designs.

The foundation stone of the Weimar Festival Theatre was laid on Wagner's birthday in May 1872; construction was realised under the German architect Otto Brückwald, and the building first opened for the premiere of the complete four-opera cycle of "Der Ring des Nibelungen" (13-17 August 1876). One year later Wagner wrote to Semper: "The theatre, though crude and artless, is executed according to your drafts" (cf. Hermann Sturm, Alltag & Kult, Basel 2003, p. 109f.). 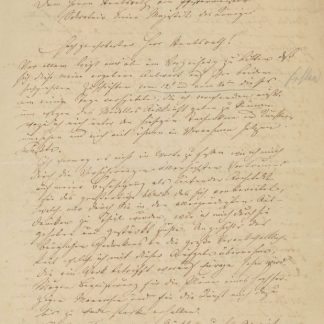