Spectacularly illustrated manuscript describing and illustrating many moveable and rotating pyrotechnical units and machines, including rockets. The title-page, bearing the name of a former owner (Valentino Vieri, who probably also added some probationes pennae), is followed by a description of the first 62 coloured drawings, beginning with the "Giuoco della Luna e Sole" (games of moon and sun), including all sorts of revolving, spouting, exploding and firing units, rockets, and other gadgets: On fol. 20r three objects are illuminated: an aloe vase, a tree, and a coat of arms, inscribed "Dini". Fols. 20v-23r show full-page installations, including a "Colona Trionfante" with a winged angel on top, a Lion of St. Mark, the symbol of the free Republic of Venice, holding an open book with his right paw (displaying the text "Pax tibi Marce Evangelista meus"), an oval on top of a balustrade, bearing the text "W. Gesu Giuseppe e Maria", a "Piramicia Egiziana", and a cupola with lanterns and fire pots. Fols. 23v-25r contains two double-page war scenes: the first, a fortified castle by a coast, with a vessel and a galley at sea; the second, a fortified tower and an army camp with tents opposite, with symbols of war and military equipment in the foreground. The final fols. 25v-36v contain indexes and instructions for fireworks: (1) "Indice delli Giuochi di Fuocho" (the various units and rockets; fols. 25v-26v); (2) "Regole Generali": 84 numbered instructions for construction and operation of fireworks (fols. 27r-35r); (3) "Indice delle Misture" (fols. 35v-36r); and "Catalogo de Generi ed Utensili" (fol. 36v).

There may be a connection between this manuscript and the Papal Master of Ceremonies Msgr. Giuseppe Dini (d. 1799). The Library of the Getty Research Centre possesses a ms. written by Dini ("Relazione o sia diario di tutto quelle che e stato osservato in Roma nelle venuta del Re delle due Sicilie Ferdinando IV e la Regina Maria Carolina Arciduchessa d'Austria", 1791) containing biographical and historical notes, including descriptions of the preparations for the royal visit with details about the route, the number of soldiers guarding the visitors, and the costs of the entertainment (including operatic performances and fireworks). At the back of that manuscript are printed announcements of the firework display and official appearances by Pope Pius VI.

In 1782 Dini - as that Pope's Master of Ceremonies - published a diary of the Papal journey, via Venice, to Vienna (undertaken with an aim to mitigate the social and ecclesiastical reforms enacted by Emperor Joseph II). Perhaps the ms. with its explicit references to the Republic of Venice can be connected with this 1782 journey (a German edition, "Vollständiges Tagebuch von der Reise des Pabsts Pius VI. nach Wien", appeared in Breslau in 1783). Another possibility is a connection with the election of the new Pope Pius VII in March 1800 in Venice, after a very difficult conclave in Venice that began in December 1799, soon after the death of Pius VI and just before the death of Dini on 2 November 1799. 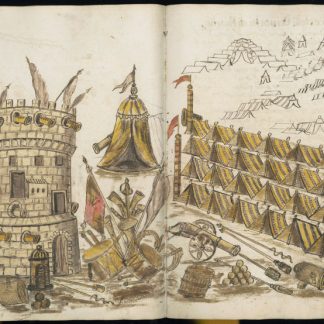