Glanvill, Joseph. Saducismus Triumphatus: or, Full and Plain Evidence Concerning Witches and Apparitions. In two parts. The first treating of their possibility. The second of their real existence. The second edition.

Joseph Glanvill's famous book on witchcraft, which first appeared posthumously in 1681. The editor is presumed to have been Henry More, who certainly contributed to the volume. This second edition is the first to include topical material on witchcraft in Sweden, supplied by Anthony Horneck (from a Dutch pamphlet of 1670). The book affirms the existence of witches with malign supernatural powers of magic, and attacks skepticism concerning their abilities. Glanvill likens these skeptics to the Sadducees, members of a Jewish sect from around the time of Jesus who were said to have denied the immortality of the soul. The book is also noted for the account of the "Drummer of Tedworth", an early poltergeist story. "Saducismus Triumphatus" strongly influenced Cotton Mather in his "Discourse on Witchcraft" (1689) and the notorious witch trials held in Salem, Massachusetts, in 1692/93. Mather's "Wonders of the Invisible World" (1693) is largely modeled after this book and its reports, particularly the material relating to the Mora witch trial of 1669.

Some browning as usual. Spine severely damaged; book block is broken in several places. Upper cover, flyleaf and engraved frontispiece loose; frontispiece, engraved and printed title frayed at edges; wants the lower cover and the final 3 leaves (comprising the end of the text, an engraving, and the final errata leaf). 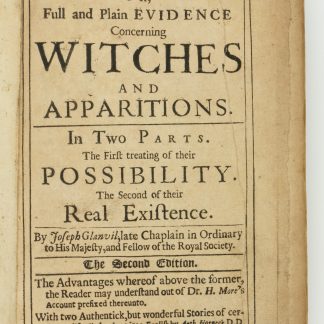