Addressed to Monsieur Caillebeaux, a promissory note for 2,000 livres to be paid to Monsieur Gilbert "marshand de toile a Versailles".

One of the last of the big-spenders of the Ancien régime, the Comtesse du Barry was at the epicentre of the cult of extravagance at Versailles and her quest for gowns of the utmost luxury has entered the realms of legend. Here we find her submitting a promissory note to M. Caillebeaux ‘Controlleur des ventes de la ville’ in favour of a Versailles cloth merchant, for the enormous sum of 2,000 livres. The document is signed on the verso by the merchant Gilbert. Though the Comtesse must have issued thousands of these notes (a good number survive) they are usually only signed by her and are rarely entirely in her hand. This one is entirely in her autograph.

Already a practised courtesan, Jeanne Bécu had been installed at Versailles in 1769 and quickly became the object of Louis XV’s infatuation and his official mistress until his death in 1774. She was showered with gifts by the king, until the disaster of the diamond necklace ordered for her in 1772, at a cost of two million livres, which brought about the tangled web of deceit and extortion that fatally damaged the French monarchy in the following decade. The Comtesse du Barry was beheaded during the Terror. 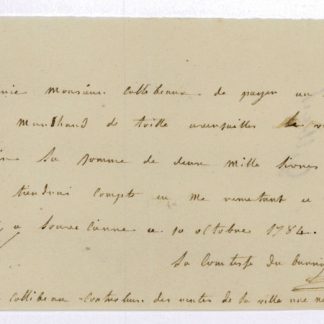