Receipt to Jean Brunet, receiver at La Rochelle "de la somme de mille quarante livres qu’il nous a envoyée par une lettre de change tirée sur Claude Laquain banquier à Paris". The courtier and father of the renowned memoirist Saint-Simon signed this receipt at the very end of his long life, just over two months before his death, as is graphically displayed in his shaky signature. Saint-Simon had entered the service of Louis XIII in 1627 and rose to become a royal councillor. His lands were in the vicinity of La Rochelle, given him by royal grant after the fall of the Huguenot-dominated city in 1628. Although, by the end of his life, under Louis XIV he held little effective power in the royal court he maintained an unusual (even excessive) sense of the dignity and importance of his family, a state of mind doubtless bequeathed to his son. 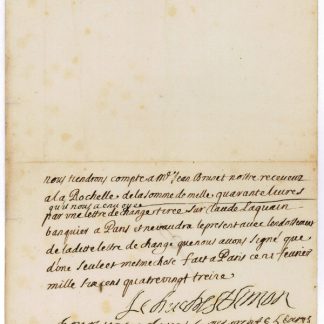