Expressing his regrets but his return has been postponed and he will perhaps be absent form Paris for all the Easter week.

The experimental physicist Becquerel is noted for his work on magnetism. In 1840 he discovered the electrical currents produced during photochemical reactions and studied the intensity of light in such currents. Inventor of the phosphoroscope, he also engaged in spectral studies. It is amusing that Becquerel should still be using "Arts & Métiers" notepaper eighteen years after he had ceased to teach there. It was in 1878 that he was appointed Director of the Musaeum d'Histoire Naturelle, Paris. 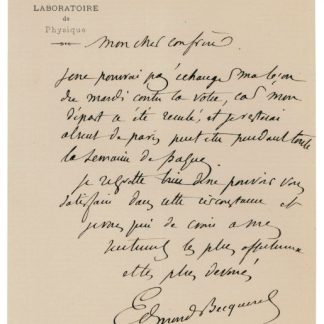