Written from Fort-Royal, where he commanded a division between 1844 and 1847. Laplace informs his correspondent that he has kept the addressee's nephew aboard his frigate and thinks of returning him to Basse-Terre (Guadeloupe). He further writes that he had planned to return to Guadeloupe sooner, but circumstances had prevented him from traveling.

Laplace was commander of La Favorite with which he circumnavigated the globe between 1830 and 1832, promoting France's overseas trade. In 1837-1840 he made a second voyage during which he visited Hawaii with the 52-gun frigate L'Artémise to end the persecution of Catholics (as the French saw it), an intervention known as the Laplace Affair. 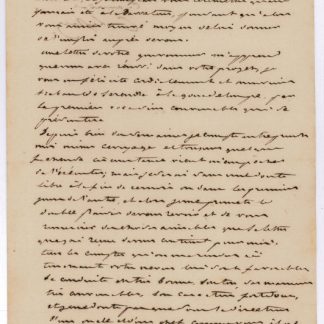