Due to his widely ranging personal contacts, Vladimir Bourtzeff managed to expose numerous Russian spies and agents provocateurs. "In Chicago I had the opportunity of meeting the famous Russian revolutionary Vladimir Bourtzeff. I was greatly interested in his recital of the arduous mission that had come to him of unmasking Azeff as a police spy. Azeff was undoubtedly a most exceptional phenomenon in revolutionary annals. Not that there had not been before, or since, traitors in revolutionary ranks. But Azeff was no ordinary spy, and even today the psychology of the man remains an unsolved enigma. For years he had not only been a member of the Fighting Organization of the Socialist-Revolutionary Party of Russia, but also the all-powerful head of that terrorist body. He had planned and had successfully executed numerous acts against the highest dignitaries of the Tsarist Government, and he enjoyed the absolute confidence of all his co-workers. When Bourtzeff charged Azeff, the ultra-terrorist, with being an agent of the Russian Secret Service, even the nearest friends of the accuser thought him demented. The mere suggestion of such a possibility was considered treason to the revolution, for Azeff personified the very spirit of the Russian revolutionary movement. Bourtzeff, however, was a man of dogged tenacity who possessed an unerring intuition in such matters. He had exposed a number of spies previously, and his sources of information had always proved to be entirely reliable. Yet even he underwent a long inner struggle before he could bring himself to believe in the guilt of the trusted head of the Fighting Organization The data Bourtzeff secured were incontrovertible and damned Azeff as a man who had during a period of twenty years managed to dupe the Russian Secret Service and the revolutionists at the same time. Bourtzeff succeeded in proving Azeff a traitor to both sides, and both resolved to punish Azeff by death for his monumental deceit. Yet even at the eleventh hour Azeff tricked them, by escaping without leaving a trace" (Emma Goldman: Living My Life. 1931, Kapitel 38).

On headed stationery; some browning and brownstaining. 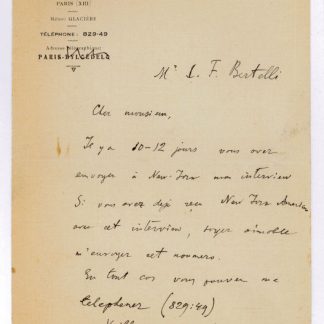