An exhortation to fight the Turks, published in 1497

First edition of the author's first important work, an exhortation to fight the Turks, couched as a Latin tragedy. Jakob Locher (1471-1528) had been created poet laureate but months before. The volume is concluded by a "Dyalogus" against all forms of heresy (and including encomia and dedicatory addresses to the Emperor and the nobles of court and clergy).

Contains fine woodcuts, some of which were used previously in the Strasbourg editions of Terence and the Ship of Fools; at least six blocks were cut originally for this book. "The opening woodcut depicts the author and newly crowned poet laureate" (cf. von Arnim). This is the earlier impression without the armorial woodcut on fol. B6r (as in Schramm); the final line of fol. J3r still reads "tekos" (for "telos"). Typographical errors "Jacboi" on fol. L2r; "Daum" (for "Datum") in final line of fol. L3r; colophone reads "anno christo". A pinhead-sized wormhole throughout the blank margin (not touching text). Top edge trimmed rather closely in places; a few underlinings by a contemporary hand. Altogether a fine, very clean copy. Extremely rare; last seen in the trade more than a decade ago (Shipperdson-Field-Nakles copy, Christie's New York, 17 April 2000, lot 22: $15,275). 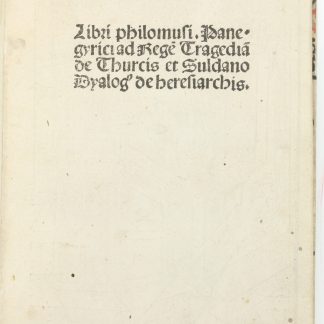