An elliptical and erratic late-night missive betraying wild mood swings and littered with expletives, the present letter to Kerouac's then girlfriend Lois Sorrells opens, "it's now 4 in the mawnin and I've been typing up to 35 pages of manuscript of Big Sur novel [...]". Kerouac asks Sorrells to "Drop me one of yr sweet poetic notes soon, I'm lonely", before he segues into a profanity laced rant against his ex-wife (Joan Haverty Aly) and his having to travel to New York to take a paternity test. He goes on to offer up a reason why he hasn't asked Lois to marry him ("Even you could turn against me in legal marriage"), makes references to mutual friends in New York, then closes with a cryptic admonishment: "I like you for you [...] But you should never again run down the street to yr therapist knocking down innocent women's bags and papers and bump into handsome polite Negro students, hear me?" He also suggests she reread Dostoyevsky's The Possessed for insight into "getting rid of guilt." Kerouac spent several miserable months of 1961/62 in Orlando, where he and his mother had moved to escape the embarrassment caused by Aly's public claims that Kerouac had fathered a child with her. (As a result of the paternity test, Kerouac was ordered to pay child support.) See Charters, Brother-Souls, pp. 305 ff.

Some toning, a few light smudges to margins and tiny tear to one edge, folding creases. 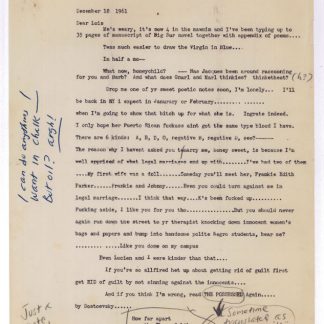