Rare first German edition of Eisenberg's famous riding school, which boasts beautiful illustrations of horses and horsemen (repeated from the 1727 French original edition). Arabian horses in particular are lauded as "the finest produced by the Orient. They are exceptionally fine animals, especially those from the hills of Mokha [...] Arabian horses are full of fire and vigour in general and are possessed of a great natural agility [...] Their start is like lightning, and so they are incomparable for racing and tournaments, for they are skillful as well as swift".

Binding rather chafed in places; hinges beginning to crack. Some edge damage to plate IV; some browning or brownstaining to margins. From the collection of the Leipzig jurist and later senior alderman of the Leipzig council, Christian Gottlob Bose (1726-88), with his autogr. ownership "C. G. Bose. 1748" on the printed title. The Boses, a wealthy Leipzig family of merchants and aldermen, were close friends of the family of the composer Johann Sebastian Bach. While it was known that the twelve-year-old Christian Gottlob had taken violin lessons with the theologian J. C. Weiß, the young law student's passion for horses - an expensive hobby, but well within the means of any son of the gold and silver manufacturer Georg Heinrich Bose (1682-1731) - was hitherto unknown. 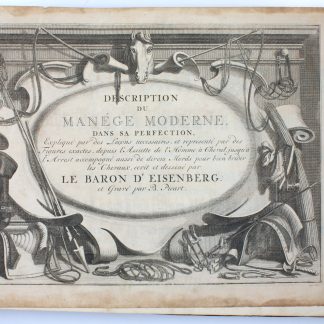